With interest in African artists booming, Adora Mba opened ADA \ contemporary art gallery in Accra, Ghana in 2020. She intended for the space serve to serve as an art incubator for the emerging artists from the African continent. Mba, an African art advisor and editor conveys optimism about Ghana's long term prospects regarding its art "I am confident that Ghana will grow to become the new art hub of Africa. Looking at the most prominent artists these days, many are from Ghana – the talent is clearly there and waiting on a much-anticipated attention" Mba strongly expresses her conviction: "I actively believe in the durability of Africa's creative scene and by developing it from the inside and affirming it internationally we are also acting to strengthen it and make it increasingly independent from a shifting, sometimes deceptive global demand." Mba, who had worked in London for many years as an African art advisor and editor says that when she started her career artists from the African continent were nonexistent "I once had clients who flagged that they would rather "get a Banksy print" than invest in an African artist's work". Mba says that the global market has increasingly turned its attention to African and Black artists as viable creators and worthwhile sources of investment – which made the opening of ADA all-the more timely". Mba explains that the issue at this stage is that the local buyers market does not have enough infrastructure to support the talent which Ghana produces which leads many creatives to develop their careers in Europe or the United States. She believes that if the needed art galleries and museums were developed in Ghana these artists would remain in Ghana. Mba's passion is to change this narrative and is actively working on developing and encouraging the supportive infrastructure Ghanaian artists need. Mba points out that the art scene in Ghana is less developed despite the meteoric rise of artists such as Amoako Boafo whose painting The Lemon Bathing Suit (2019) was sold for $881,550 US at Phillips' Auction House 20th Century & Contemporary Art Evening Sale in London in February, 2020. Sam Gaskin, an arts and culture writer and editor, references the astronomical price that was offered for Amoako Boafo's The Lemon Bathing Suit (2019) ﻿and notes that the price eclipsed the estimate of US $38,700-$64,500 more than ten times over. He asks quizzically in his February, 2020 article "Who is Auction Sensation Amoako Boafo?". Gaskin comments on how "the result is especially surprising given Boafo's age—he's just 36—and because it's the first time his work has gone under the hammer. So who is Boafo, and why is he so keenly sought after?" Gaskin points out that the price paid for Boafo's work—reportedly driven along by a phone bidder from Hong Kong—follows increasing interest in the market for work by black figurative artists and that Philipps Auction House has repeatedly debuted young artists from Africa or of African descent in recent years, including Derek Fordjour, Nina Chanel Abney, Jordan Casteel, and Tschabalala Self. Gaskin also notes that Harlem-born Self's Princess (2017) obtained US $566,000 at the same sale. 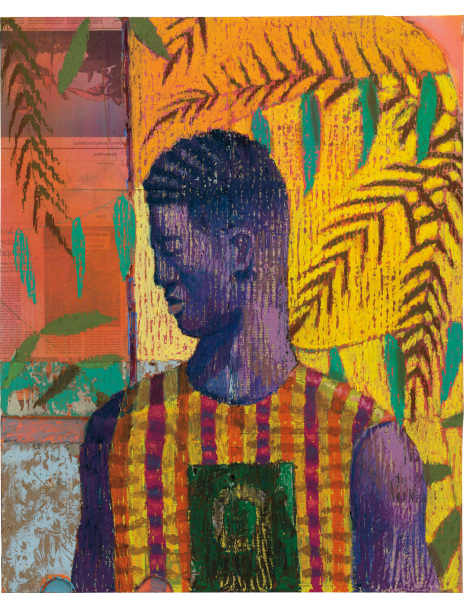 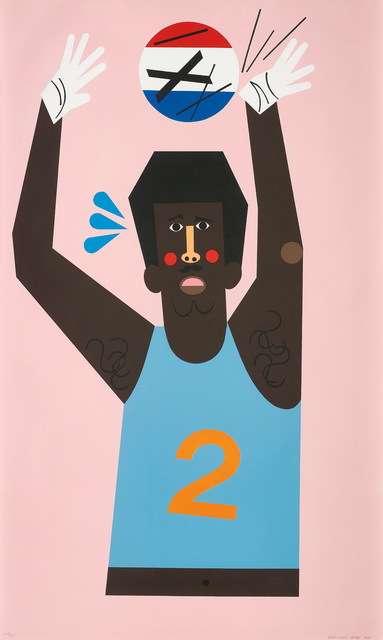 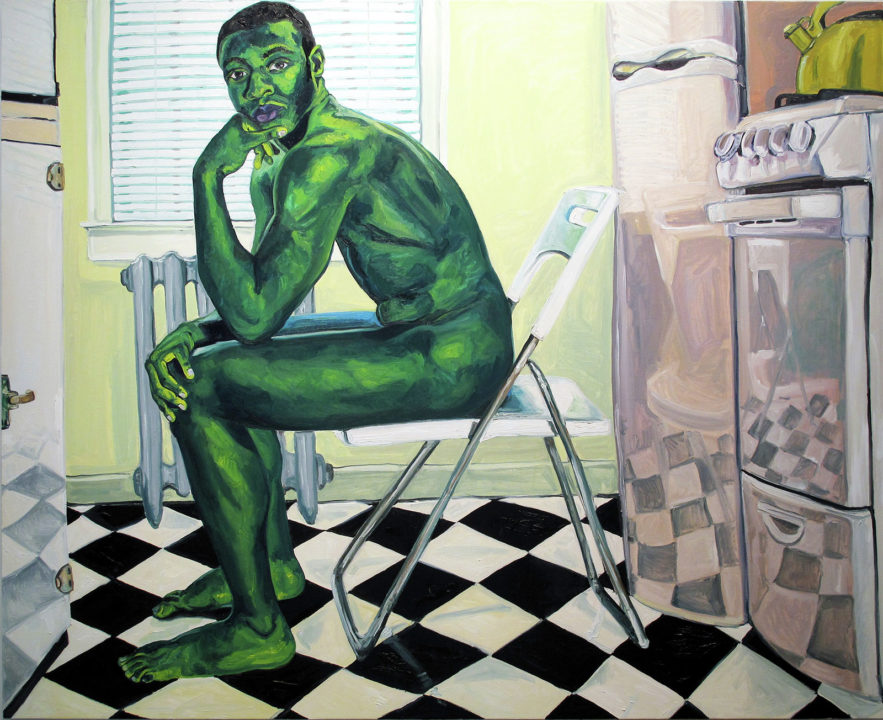 Phillips' auction house isn't the only major auction house progressively moving in that direction; others include Christie's, Bonhams and Sotheby's. With long-established reputations and many high-profile sales, these houses are making place for contemporary African art in their catalogues; some already have dedicated departments of African art, while others are offering thematic sales featuring African artists. Amoako Boafo exemplifies Mba's reference to the many creatives that leave Ghana to develop their careers in Europe or the US because of the lack of infrastructure support. Boafo was born in Accra, Ghana, in 1984 and lost his father at a young age. While his mother worked as a cook, Boafo stayed home and taught himself how to paint. He never intended to be an artist. It wasn’t an option. “It’s something that I wanted to do from the beginning, but in Ghana, we don’t have the arts infrastructure,” Boafo said. “You have to find those things yourself.”

After a few years of supporting himself as a semipro lawn tennis player Boafo was given the chance to go to art school when an older man for whom his mother worked offered to pay his tuition. He graduated from Accra’s Ghanatta College of Art and Design in 2008, taking home the Best Portrait Painter of the Year Award. In 2014, he moved to Vienna with Sunanda Mesquita, the Austrian artist who is now his wife, and pursued an MFA at Vienna's Academy of Fine Arts.

Struggling to find his footing in Austria, Boafo began painting portraits of Black figures he met in Vienna's cultural demimonde with twisted torsos indebted to Vienna Secessionists like Egon Schiele who was a major figurative painter of the early 20th century. Schiele was a protégé of Gustav Klimt, who who was an Austrian symbolist painter, and one of the most prominent members of the Vienna Secession movement. Boafo's breakthrough came when he decided to ditch his brushes in favour of using his paint-dipped fingers to render his subjects’ faces, creating a striking textural contrast. It did not take long for Austria's cognoscenti to take notice of Boafo awarding him the 2017 Walter Koschatzky Art Prize for works on paper by artists under 35. This is when his recognition and acclaim started. In 2019 Boafo won Austria's STRABAG Artaward International for artists under 40. Boafo is described as having developed a distinct style, using his fingertips to paint portraits of black men and women who, he says, "live their blackness". He explained to Culture Type 'I find strength in—how they celebrate [and] live their blackness' After showing his art in Ghana and Austria, Boafo had his first show in the United States at Roberts Projects in Los Angeles in 2019, entitled I See Me. It is interesting to note that Boafo was recommended to the gallery by Kehinde Wiley, who found Boafo on Instagram. In December 2019, Chicago's Mariane Ibrahim's Gallery showed a solo exhibition of Boafo's paintings at Art Basel Miami Beach. The entire booth sold out with prices ranging from US $15,000-$45,000. During the fair, the City of Miami Beach inaugurated a new Legacy Purchase Program, acquiring Boafo's Cobalt Blue Earring (2019) from Mariane Ibrahim for US $44,000. Mba says that she chose to open her art gallery in Ghana for several reasons: it is her home so she is familiar with the dynamics at play and she feels a duty to help develop the country's art industry. Mba elaborates that 'Being half Nigerian, Lagos was also an option, but it was clear that the art scene there is already bustling. Nigerians buy art, invest in it, have galleries, museums and art fairs." Mba chose to open her art gallery in Accra's Villaggio Vista an area she describes as a “lively luxury estate complex  with  lots  of  popular  restaurants and bars”. The thinking," she says, "is to grow the local collecting base. “People will walk past who might not think they can buy art and they could be pleasantly surprised." Mba says that Ghanaians are only just starting to see the benefits, both social and economic, of a solid art industry and community.